Day 7 of my big European summer train trip means I spent Night 6 on the train.

On the face of it, taking the night train from Zagreb to Zürich seems both like an incredibly odd yet romantically adventurous thing to do – pick two random European cities beginning with ‘z’ and travel between them on a rattling sleeper-train with all its Agatha-Christie-style connotations. Continental jewel thieves, arms dealers, eloping runaways, disgraced financiers, ambassadors of long-forgotten principalities and down-at-heel European nobility – all basically included in the ticket price.

I’m sure there are rail journeys still like that in Europe but it will come as little surprise to learn that the 18.38 to Zürich isn’t one of them. It was BLISTERINGLY hot for a start, and the air-conditioned buffet car that I had been planning to spend the evening in, chatting to mysterious widows over caviar and champagne, turned out to be a figment of my over-heated imagination.

The catering facilities consisted of a lady with a tray of packaged croissants and instant coffee that could only be accessed at 7am the following morning.

Gazing out of the window at the rolling Balkan countryside was also out, since the the six-berth cabins were already made up into beds. Which left standing in the corridor, getting in the way of the conductor and attempting to translate the various warning signs – leaning out of the window, apparently not recommended; ditto opening the window and throwing things out of the window. Basically, don’t touch the window. Which rather reduced the entertainment possibilities on the Zürich express to zero.

The available space for moving around in a top bunk in a six-berth cabin is a cross between that encountered lying in a coffin and getting stuck underground while caving, all the while rocking from side to side as if coffin or cave were also experiencing a minor but ongoing earthquake. I say earthquake. The movement could be volcanic – surges of magma perhaps – given that the ambient temperature in the carriage was about a million degrees.

What seemed like several days later, released from my deprivation tank, I was treated – why ambassador, you spoil me – to a cup of instant coffee and a shrink-wrapped croissant and turfed off the train at the Swiss town of Sargans.

The problem with visiting Liechtenstein on a round-Europe train trip is that Lichtenstein doesn’t have a train service. But if you get off at Sargans, an hour shy of Zürich (or come by day trip from Zürich, either works), there are buses that whisk you straight from the station to the main town square of one of Europe’s smallest countries. All that’s left to do is climb up the steps through the woods to the castle and look at the alpine views and then come back down again to the Tourist Centre where for €3 they will stamp your passport to say that you’ve been. For EU citizens – I’m still proudly one, at least for now – this is a big deal, because you just don’t get stamps in your passport any more.

It’s also by far the cheapest thing you can do in Liechtenstein – another bonus – which shares neighbouring Switzerland’s policy of being Astonishingly and Eye-Wateringly Expensive. Not cool Liechtenstein, not cool, I came all this way to see you. 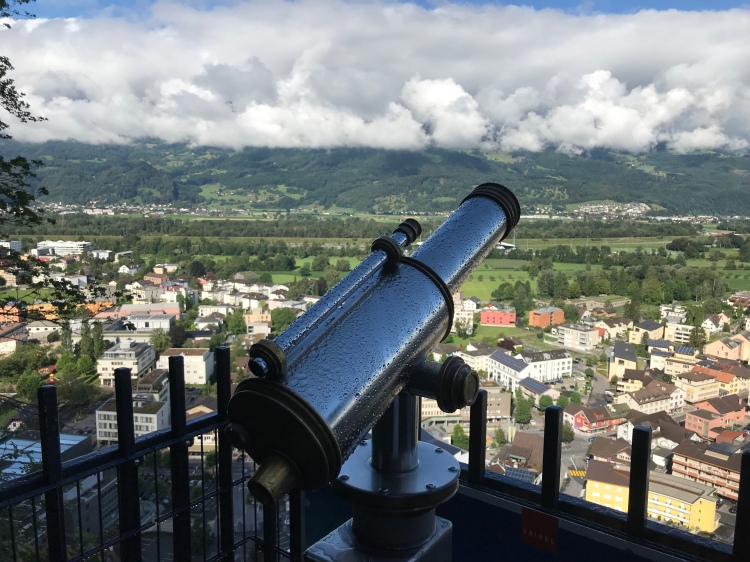 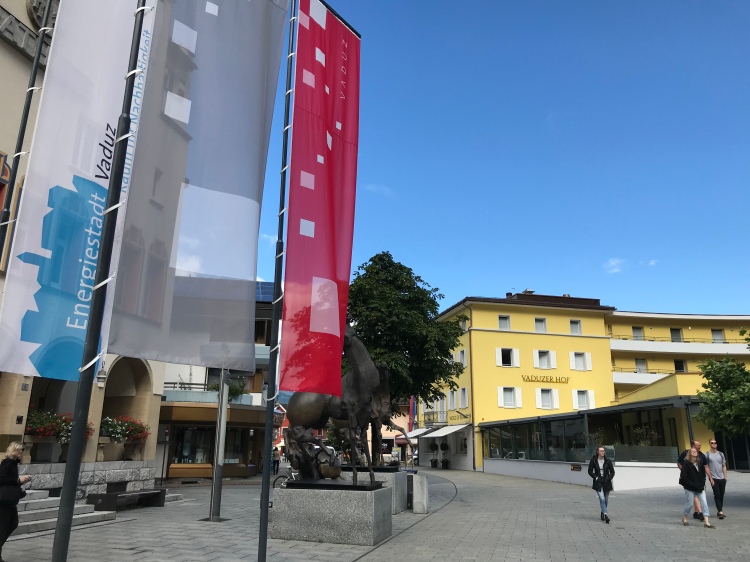 Zürich is a very handsome city, with grand buildings set down both sides of a wide river that tumbles into a lake. Trams trundle, steeples soar and church bells sound. There are delightful cafe-bars overlooking the water, and inviting restaurants of all cuisines in shady old-town squares. However, wander a while and study the menus and you will see that the general pricing policy seems to be – start with the actual price of a dish, a pizza say, or a plate of spaghetti, double or even treble it, and then add another €10 or €20 for a laugh. Confirm to the customer with a straight face that that is indeed what it costs, add on another €5 for a glass of water, and don’t forget the 10% service charge.

No, of course I have no restaurant recommendations. I ate in a supermarket cafeteria and spent a month’s mortgage payment on breakfast at the train station next morning. 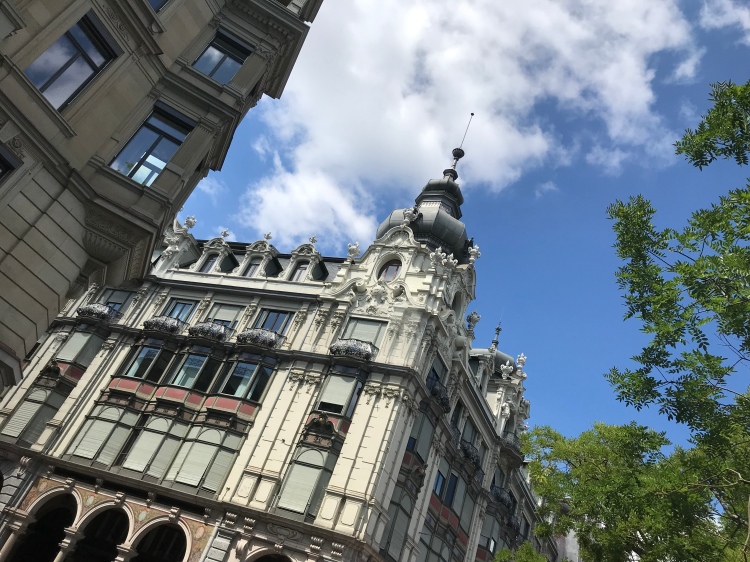 But you know what? Life, being too short and all that? The leafy, shaded square by the river outside the grand old Hotel Storchen really did look inviting, and the views were charming. Waiters in black braces and bow ties glided around with glistening trays lined with starched white linen. I sat down to the single most expensive cup of coffee I have ever ordered – need to know basis I’m afraid, my accountant is probably reading this – and sipped the bejeesus out of that bad boy until, about an hour later, it could be sipped no more. If you ever come into a windfall, a bequest from a long-lost aunt say, then I thoroughly recommend a drink at the very classy Hotel Storchen in Zürich. 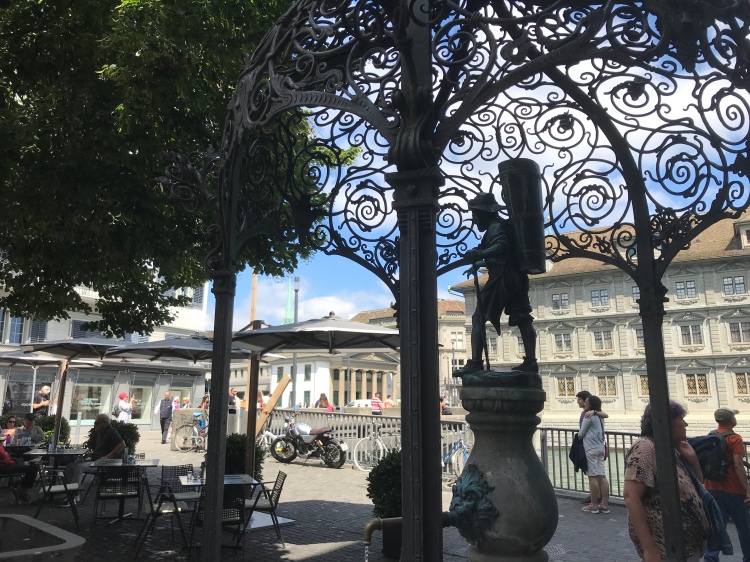 And that’s it from Liechtenstein and Zürich – which I haven’t really warmed to, if I’m honest, though I suspect that’s at least partly because they are just so annoyingly expensive. It puts me off, if I can’t sit down for a coffee or a glass of wine when I feel like it, let alone eat anything remotely enjoyable. Of course, that’s mostly my fault for not earning enough.

And maybe it’s just me (and yes, it’s definitely lazy stereotyping on my part), but there’s a pristineness, a just-so-ness about both places that grates. Everything works. Everything is tidy. Alles ist in ordnung. I prefer a Mediterranean shambles (really going for the stereotypes here), a country that’s a bit scruffy around the edges, where wine, coffee and good food are daily essentials, not things you have to save up for.

Luckily, I’m going to Italy next!

I am out of here, next stop Milan, over the fabulous Bernina Pass on one of the great European rail journeys, see you there!